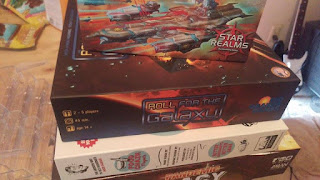 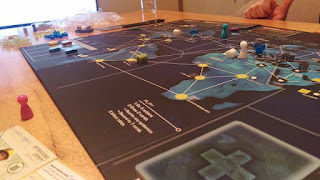 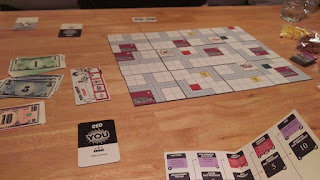 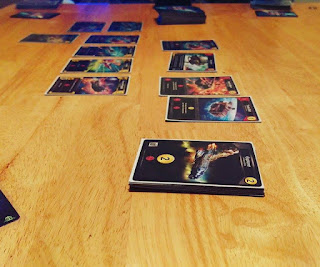 To those of you who follow this blog and don't know what International Tabletop day is... What are you doing here?... Haha, jaykay.

It is a day when Friendly Local Game Shop (FLGS) and game stores online have semi-underwhelming sales and get exclusive promos for games we all love. Dixit has had several promos. I haven't picked them up, but I have eyed them on ebay a few times. ($17 for one card is kind of out of my interest zone)

I, being the non-social gamer that I am, opted to spend the afternoon with my friend and her husband. The same couple I play D&D with; we also have reached May on Pandemic Legacy.

The premise of the Pandemic series is that you have a map of the world, and using a cast of characters, you try to find cures for 4 diseases spreading across the globe. It's fun, It is one of the first board games I ever bought, and we've played it a lot over the years. I have the old edition, but my friend bought to play with her kids and friends when I am not around, and the new edition has more pieces.

Pandemic *Legacy* (Season 1) is one of newly trending legacy games. Legacy means you make permanent changes to your game board, so every time you play, it is a little different than the last time. Pandemic Legacy takes place over 12 months. It is set up so that you get two attempts at "winning" each month, but the damages still take place. We failed May twice in a row, and had to make permanent changes each time. Every month you draw cards from the "legacy deck" which tells you how many to draw and which compartments of your secret, advent-calendar-style dossier to open.

There are 8 sealed boxes and several sheets of sealed advent-style information. The legacy deck tells you which items to open. Every month we end up opening a little more. Each door has stickers in them, some update the actual rules in the book, some provide stickers to modify the board, or the character sheets.

Pandemic Legacy is scary and makes you think about every single move you make, as permanent changes are made to your board every time you play. Each outbreak is marked by a numbered sticker, which you update each time that city outbreaks, 1-5. Each number represents limits placed on the city - it takes extra actions to move in and out, you have to discard cards to move in and out, or you straight can't go there, unless you have the ability to.

If you are in a city when it outbreaks, you get a permanent scar on that character. on the third scar, that character dies and is removed permanently from the game. In our box, the medic (Sanchez) got one scar and then we upgraded him so that he won't receive scars for being in a city when it outbreaks, because he is important for disease control and has played every single game.

We also played a few rounds of Star Realms, a two player, space themed, Deck Building game. It's fun. Ended up lending it to my friends so they could get a couple more plays out of it.

The last game we attempted was Food Chain Magnate. We waited until kind of late and tried to learn how to play - reading through several pages of dense rules with nto enough examples (and terms like "orthoganally adjacent".. which means shares an edge with, not-diagonal, n-e-s-w.

We were all a little worn out from the rest of the evenings activities, and i didnt have a quick rules layout, so we got worn out mentally and were making bad choices that quickly bit us all in the asses, so we decided to put a bookmark in it and come back to it.