Dungeons and Dragons Session 7: In Which we confront the BBEG

There is a second item rumored to be in the priory. Karath remembers. It was a very rare rumor: Bahamet's eggs (..pretty sure bahamet is a dude, but whatev)

The group wakes up from their long rest and hears battle outside. More ghostly apparitions lead them south, towards the only way they hadnt been.. The ghost sees Karath and responds to only him, Mistaking the dragonborn, in his new armor, for the dead/dying captain the group saw betrayed in the courtyard. We learn the Vessimeer had betrayed the captain and there is a rift, which Karamath has been sent to initiate self destruction.

The guard leads us into a room with a fully articulated statue in it. As soon as Karath enters, he activates some a tile, which lights up. Each subsequent member that enters causes the floor to light up in a giant square around the statue. There are two giant statues inside the room with runes. They breathe fire balls, and the articulated statue spins a weapon in a circle around his body every turn. There is a corridor with crystals. Cthumoo walks into it to destroy the crystals and magic seals the hallway and causes it to start filling with water. The team destroys the statues, while Cthumoo smashes all the crystals, freeing himself

The door in the corridor leads into deeper tunnel with distant moaning emanating. The group quickly, cautiously proceeds down into the dark tunnel - Immediately triggering alarms, pulling zombies and ghouls from two directions. In a fierce move, Karath lets loose some dragonsbreath, killing 8 in one hit. Quickly killing the rest the group is spurred on by some tectonic shifting.

They enter a room with some hanky magic going on. On the opposite end there is a raised platform with an altar, and the priest, Aziroth, that confronted the group in the courtyard (before running away with Karath's clutchmate.)

Energy pulses from the altar through 8 pillars, surrounding a giant blood rune on the group, ending by pulsing into the giant statue of Bahamet with 3 eggs of Bahamet on it. There are minions throughout the whole room. LegoLass quickly dispatched most of the minions as the Bard and Wizard try to use arcana and prayers to stop the rift from opening.

The two tanks (Barbarian and Paladin) start using the priest's own hands to hit himself while yelling "stop hitting yourself." The wizard is pulled from the altar and flung into the bahamat statue, lightning immediately killing him dead. Dally picks up the arcana and religious checks to close the rift, while Cthumoo and Karath kill the summoner and the remaining minions. In his final breath the summoner laughs and uses the last of his power to rip the rift open.

The team finds some goggles for the dead wizard and almost enough gold to pay to resurrect him. The team quickly makes their way back to Hocks hollow and has Floki resurrected. True to his word, Hoggins has sent his boys to fix the barge and the team is ready to depart.

-Thus ending the Adventure in Hock's Hollow. Inc. A ballad.

Posted by Vanessow at 4:20 PM No comments:

My Darling Cousin bought some 5e books and is forcing us to create some 5e characters for a small campaign.

I, predictably, decided to build another bard. This time a tiefling with a fun background: 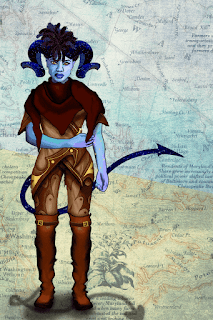 Born on material plane, Birth mother was scared the tiefling baby would be seduced by the evil side. She hoped sending the baby to a lawful good plane would help. She left the baby on Mount Celestia (Heavenly plane.) Deciding that a stable family environment may be better than a strict life in a monastery, the celestial paragons (leaders of the 7 levels of heaven)  decided to let childless, mining, Dwarven couple Helona and Vamnoc Treasurebane adopt the young girl in their home of  Solania, The Crystal Heaven (fourth level)

They named her Delphinia, after the tall, blue wildflower that grows in the valley near their home. Though raised in a dwarven family environment, she attended a lot of classes at one of the many monasteries on the plane. After discovering her bard powers, she attended bard college in the same region.

She looks up to Pistis Sophia, the Celestial Paragon of Solania. Fin tries to adopt the same ascetic  traits. She is stoic, and quiet. Fin is a woman of few words, but has a story for every event. She believes in self discipline and lives a mostly-abstinent life. She rarely lets loose. She is kind of zen.

She returned to the material plane to learn about the real world and find her family/learn about her tiefling origins.

I am thinking about working from an angle where I basically just use Aesop's fables to give roundabout advice.

Dungeons & Dragons Session 6: In Which... BATTLEBOTS

I waited to post this and I've lost some details.

After defeating the bad guy from the last episode, they decided to press on and try to catch up with Karath's brother. Theyworried that the bad guys are getting away and may destroy the town of hocks hollow.  Instead they found a room with a fun puzzle. A keyhole in an altar. a key. a room full of deactivated warforges. Instead of taking a long rest, they explore the room.

Cthumoo saw a sweet tapestry hanging behind a giant warforge and grabbed it. This activated the warforge... The Captain of the warforges.  Floki quickly grabbed the key and put it in the hole, causing a glowing crystal to appear.

He touched it and was instantly transported into a warforge. Dally quickly noticed that the remaining, uncontrolled warforges were still attacking everyone but Floki and she ran up and grabbed the crystal, with the same result.

The fight was tough and the warforges were hitting hard. The group was struggling to keep the squishy ranger alive, but she spent most of the fight as a lump on the floor. Cthumu and Karath also have a hard time staying conscious. Dally and Floki, and then Karath and Cthumu control some warforges to destroy the remaining  attackers, all of whom are beating Legolass into a pulp.

The group finally destroys all the warforges and find some ancient weapons - three crossbows and 60 bolts. they are built into the arm. Dally takes the whole arm of one, which has an autofeed for the bolts, she wants to have a smaller one built for herself.

They took a long rest this time.
Posted by Vanessow at 10:19 PM No comments: