Maybe she's born with it, maybe it's Lordaelyn. D&D p3

As you may have seen on my instagram, I bought my representative figurine for our game! And painted! And I found an STL on thingiverse to use as a base! (she's kind of giant on top of the base) 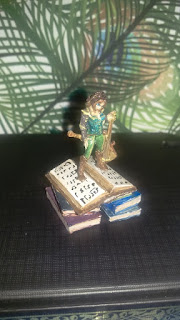 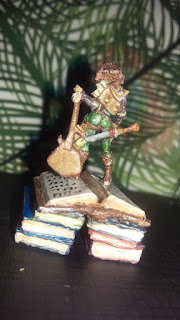 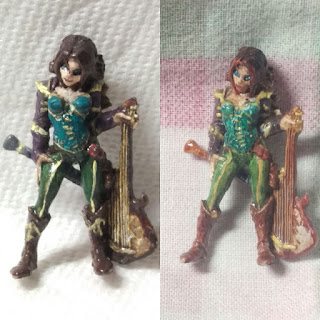 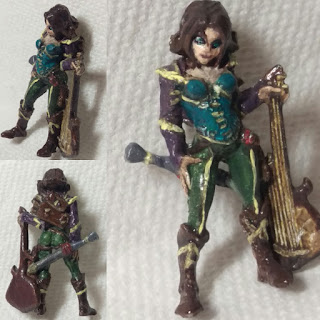 Born and raised in a human metropolis to human mother, Clemantine Penrose and Elven father, Daeven. Both parents were middle-class tradespeople. I have one sister, five years younger, named Ladella (luh-DEL-uh) aka Del.

Until I was 13(Del was 8) a great and powerful, beloved ruler was in power in our region. Our parents died during the riots following her fall/the rise of her nefarious replacement, who is still in power today. Our mom died saving us.

With no nearby family, I ended up scrounging on the streets to support Del and myself. I sang and played on the streets of a popular market. I made quite a take, enough to keep us fed and housed for 2 years. (I was 15/Del was 10) This is when I discovered my bard power. I felt very different and brought it up with other entertaining beggars. An older performer told me I might have Bard powers, so I started researching in my free time.

I was discovered and taken in by the Deva Aristocrat, Melosius, and his longtime, live-in girlfriend, Ruvog, a Giant Scholar. Melosius took us in, sent my sister to boarding school and became a patron of my arts. He gave me a lot of money to write songs/stories and perform at parties.

Because of my aristocratic patron, I've met a lot of aristocrats and nobles, as well as clergy, royalty and minor deities, one of whom I had a brief fling with (Milil). I am a giant flirt, have had many romantic, but inconsequential relationships, nothing long lasting. mostly musicians, nobles and Milil.

I have a soft spot in my heart for musicians, sad poets, emo/broody guys, merfolk and farmboys.

I am thrifty, always looking for a deal and always willing to perform for drinks, room and board, tips.

I am kind of a know it all - striving to learn everything, collects books.

I get mildly impulsive after battle. (sleeping with dudes, eating the livers of slain monsters, etc)

Secret desire to find a hunky artist who will illustrate my stories. We will be married, or just live like hippies, open a bookstore with a secret back room for black market spells and risque materials.

I have chosen to start adventuring now because my mother's journal expressed regret about not travelling or not doing more during the fall of our beloved ruler.

I've also heard rumors of a series of old journals, full of forgotten tales and adventures of my ancestors. They may or may not be acquainted with Milil.

I need to learn to tame animals - I want a giant peacock to use as a mount.
Posted by Vanessow at 12:12 PM 1 comment:

Old Friend from High School and Her Husband (or OF and HH?) have been dabbling in tabletop RPGs. They started with one called werewolf and have recently started Dungeons and Dragons. During a game night, they invited me along to the game the next night. Being the slightly introverted gal that I am, I declined, i needed at least one day of rest before returning to work.

But it piqued my interested and I messaged her a couple days later, asking if i could join in. She asked the rest of the team, and the DM and they said they could work me in. They had only had one or two sessions - and all sat as level 2. DM said he would allow me start at lvl2 as well, so everything is even.

I spoke with Ex-Roomate, as he is in love with Tabletop RPG. He gave me some pointers and suggested some easy shit. OF told me who was playing which character so far, and i really didn't want to double up. So I soul searched a little bit. What would be easy for me to play? Something close but neater? When the BF asked me what I would be if we lived in a Warcraft style world, i didnt really know, but it all became very clear. I would be a Bard. Of course I would. I love singing, telling stories, i'm introverted, but I am always interested in what people have to say.

I found a detailed guide on the internet to Barding. Ex Roommate said he couldn't help me, as he had doesn't like 4th edition of D&D, and didn't know much about it. So I was on my own. He gave me some basica advice for character building/background/motivation to adventure. My BF on the other hand, was the devil on my shoulder, telling me to do weird stuff (like drink blood to absorb powers)

I decided on a Half-Elf Female Party Bard. She worships a homebrew god of Taverns and Alcohol. She know 6 languages(using feats) I built a pretty solid background for her, so I guess I'll be kind of sad if she dies. More incoming.
Posted by Vanessow at 11:37 AM No comments: