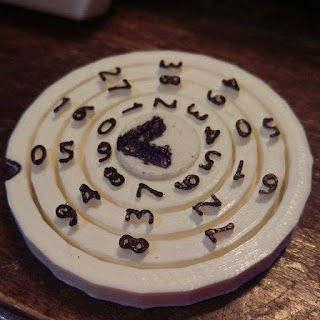 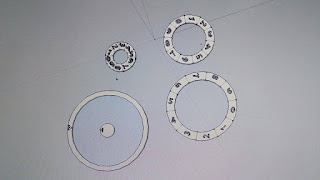 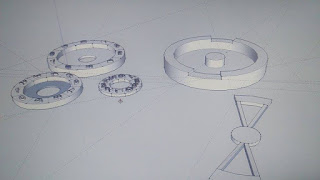 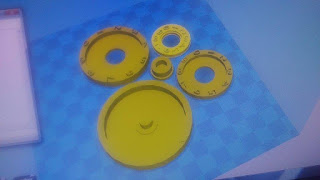 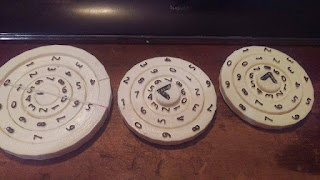 I know the last few posts have been boring to non-d&d players, and a bit exposition heavy.

In our d&d sessions, the group seemed to like the book base I printed for my miniature (which is funny because the character is obsessed with books and has a small library in her backpack, for buying/selling/trading.) My DM described a life counter style he would like to use for his monsters/mobs.

His request was to have three digits, and he sketched out his idea - which was basically a flat counter with three 0-9, all stacked on top of each other, so that 000-999 would be visible from the top view.

I found a couple interesting things on thingiverse, but nothing that works how I wanted, so I opened up SketchUp and designed a couple prototypes of my own.

My first design was a little cumbersome and blocky. I never printed anything to keep all the pieces together, so it was just a cup with three thing rings that had a small gap between them (for spinning ease.) But if you flip it over, the three rings fall out.

My second design was intended to print a topper piece that would snap into place, and hold the rings down. I also decided to make the rings more nested, with a thin disc on the bottom of each, with just a small hole in the very middle to stick on the spindle. I liked this idea more, but the snap on top didn't work very well.

My third design was base-free. Keep the nested pieces with the bottoms, and stuck a small spindle through, capping it with a snapon piece that has just an indication arrow. This is neat, but harder to change the numbers, because it makes some weird pressure points, causing numbers to spin out of turn.

My fourth design incorporated the base again, so there could be a clear line from side to side. (An arrow on the base and the center. I designed the center of the base to stick up through the disks and another snap on top to hold everything down and also line up with the outside arrow. Also, realizing how big these were coming out, and how large the battlefield in 4e is (25mm squares for each mini) I made the discs smaller.

I colored the numbers in with sharpies because I didn't want to mess around with swapping colors. The reaction at game night(Session 3) was mostly interested, but unenthusiastic. It got a look and then they got pushed to the side, unused for the evening. To be fair, they are just prototypes, and they are kind of huge, even the smallest one is 40mm diameter. The DM commented on their size, so my next prototype will be working towards functionality + small size/printer detail ability. On our next game night(Session 4), DM did whip them out and use, our battlefield was small and easy to put them to the side, corresponding with each monster.

Going forward, I am going to expand on my 4th design, making them thinner and maybe resize some of the spacing so it is easier to spin. Let's see if i can get 3 digits and a base within 25 mm.