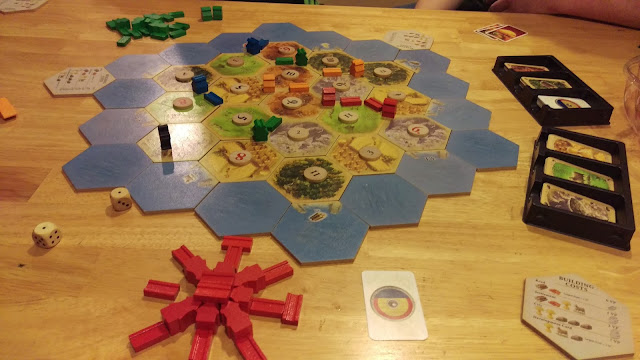 While I patiently await my shipment of PLA from Push Plastics that I grabbed on sale during the holiday, I have been filling my time with design and playing games. The designs I am not quite ready to start posting yet, as it's mostly just notes and measurements, nothing in the computer, just paper. I will have multiple posts once they are ready though, promise! 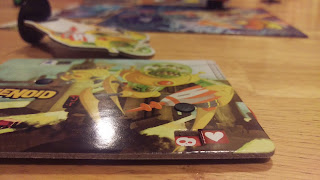 So here are some photos from our game night last night, hosted by My Friend and Her Husband. His Friend joined us as well. 4 players is a great number for a lot of games! Enough to allow a buffer between super competitive people, and enough to play party games. (My Friend and Her Husband are the super competitive ones and having another person there dilutes the competitiveness. Their motto is "I don't care who wins, as long as it's not my spouse" Which I threatened to have put on their tombstones.

We started the name with the third round of Pandemic Legacy

(not shown), a game that comes with a sticker sheet and hidden components you only add to the game when prompted. The premise of the game is that you only get a limited amount of plays, and the results are permanent and carry over between games.

Next we played Lanterns The Harvest Festival

(also not shown) I forget to take pictures early in the night, until we are putting the game away. I had a slight issue with understanding rules (you go until all the tiles are placed, not until all the tiles are picked up) and it kind of ruined the game because strategies were planned wrong. I like it and the real rules make it more fun. I feel that Her Husband would have liked it 100x better if he hadn't squandered his win in ordered to sabotage My Friend. 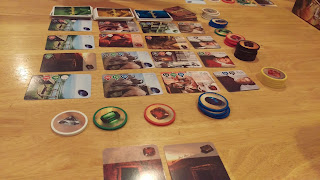 . My Friend won, I was close second! I love Splendor, it's a light game that could probably work well with any theme - baked goods, clothing/textiles, butcher shop. . but they chose Gems, and I like that! I would love to splurge on the upgraded gem tokens, or even non-canonical, acrylic gems - I feel that might be a cool upgrade that would be pretty thematic. You start trading in gems, then trade them to buy access to a mine, a trade route and then a front end shop. First to 15 points wins.

Then we played a round of Settlers of Catan

, a favorite in My Friend's house. They have the nice anniversary edition in a gorgeous wooden box, and all wooden pieces, and it sees frequent plays. Her Husband won. It was . . a standard Catan game. I rarely ever win Catan. I started without a wood source and only got onto the #12 wood. (wood being a resource which is needed to do most things) I like Catan, but I win 1 out of maybe 20 games, so I have taken a self-imposed "lol-random" stance on how I play it. Chaotic Neutral.

While My Friend threw dinner together we played a quick round of King of Tokyo. I decided to go full aggro and kept Tokyo for many turns, and the turn before they killed me, I did 5 damage! I was happy. If I had made it one more round, I would have won on sweet Tokyo Occupation points. 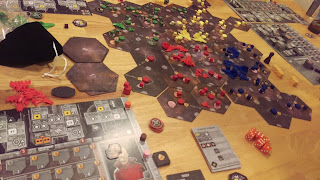 We had a quick, delicious dinner of stuffed peppers and then cleaned up for Eclipse, their newest game. This is our second game of Eclipse, as we played last weekend as well (a rare two-weekend-in-a-row event!) We played a long game, with lots of alliances, no betrayals (somehow) and a very close ending, with My Friend at 38, Her husband at 35, I had 30, and the His Friend got a 28, which really isn't a bad scoring spread. Eclipse reminds me a lot of Xia: Legends of a drift system, for it's exploration and Terra Mystica for it's resource management/earning system. There is room for as much or as little combat as possible. You can form alliances, betray alliances, fight NPCs, explore and claim new space.

We also finished the night with two rounds of Codenames. We paired "Chicks V Dicks" Me and My Friend vs Her Husband and His Friend. His Friend and I played Spymaster and did pretty great, our clues and pattern were spot on!  We got a 4-card-success!

On My Friend's first turn as spymaster, after I missed one, she blurted out "It was clearly Nurse!" to which Her Husband ruthlessly started calling her a cheater and we had to start over. He was angry because he had a perfect 4-clue lined up.

We ended on a funny note, as it was starting to get late.

Let me know if my regaling of game night aren't what you wanna hear, I'm trying to fine tune my content.
Posted by Vanessow at 11:30 PM