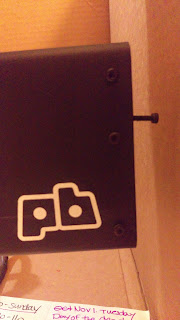 So I started a print and noticed more rattling than normal (rattling is not normal, but I keep tools on the table so they jiggle and shake and clink.) I work from home for my 9-5 (or more like 2pm-11pm) and stop getting calls at 6pm, so I set my printer to print while I am working (it's in my general home office area.)

I started noticing the rattle and then noticed this screw poking out on the arm. Of course it is one of two screws holding the grooved belt in place - the one that allows the arm to move forward and back. Miraculously, there was no slippage on the print on that axis.

About half an hour later I hear another rattle/grindy sound and look at the print, a screw on the bed's belt has also come loose, but this time there was some definite slippage. I had to scrap the whole print and didn't have time to set up a new one, as I was actually working.

The moral of the story is to do bolt checks more often. The more printing you are doing, and especially high speed printing, the bits and bobs rattle loose. This print, I only lost 30-40 minutes, but I would have been mad if it had been a longer print. It was just an alternate train holder for Ticket To Ride, I have three of the other kind, so I just wanted to test it. 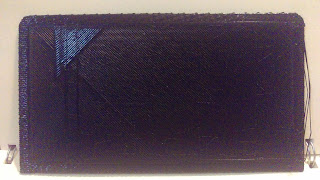 Here's a pic of the slippage. Kind of hard to tell with the black on black... but in the upper left corner, you can see the raft, and then the printed part starts. The shiny triangle on the left and the strings on the right are where the toothy belt failed for a bout 3/4 inch and the print shifted to the right.

TL;DR: PSA - Remember to just give a quick twist to your screws.
Posted by Vanessow at 8:18 PM